Been listening to Hamish Kilgour’s Franklestein album….sooooo good…. Hamish Kilgour was the drummer for ‘The Clean’ – the NZ band that brought indie pop to our small islands. His brother, also part of The Clean, went another route – staying very folk popish while Hamish always maintained a weirder edge. I far prefer this stuff…anyways, check it out. Very cool. The following gives you an idea…

I can’t get enough of this weird ass Russian / Estonian hyperpop. Namely Little Big and Tommy Cash. It is batshit crazy and I LOVE it…warning, only for those with a very well developed sense of irony and a dark, dark humor…Here’s a couple of tracks…don’t blame the messenger…

Back in the day, when I was an artist kicking around in Amsterdam (and while working at XS4ALL) I used to do this ‘n that with the local arts/activist scene. In one occasion, a friend of mine and awesome NZ musician – Alastair Galbraith – was doing a world tour with Matt de Gennaro. It was very much an indie music tour taking in odd venues in this town and that town across the US and Europe. As it happened, they wanted to come through Amsterdam.

So…first a little back ground on their music. Alastair and Matt had music careers of their own but they had recently (at that time) taken up a collaboration playing a piano wire. They would go to various venues and string up a piano wire very tight across the room and then wax their fingers and run them along the wire. The result was a beautiful ebb and flow of haunting deep and high tonal waves. Absolutely beautiful.

So I undertook to find them a venue in Amsterdam. As it happens I was also doing some work from time to time with the Society of Old and New Media housed in de Waag. De Waag is in the middle of Amsterdam and looks like this: De Waag means ‘the weigh’ and it was both the place where ships weighed the goods their were carrying for trade, is the oldest non-religious building in the city, and was one of the original gates to the city.

So I rocked up to Marleen Stikker, and friend and collaborator plus head of the Society of Old and New Media, and asked if we might host this event in de Waag. Marleen said absolutely and we went ahead and booked the venue.

De Waag, as it happens, gave us the tower to perform in which is where Rembrandt painted the Anatomy Lesson of Doctor Tulp: The tower was were such lessons were conducted…. in other words it was what you might call ‘a pretty historical place’.

So, I showed up on the day to set up and I was figuring we would have to construct some sort of temporary post to drill into inorder to put the wire up. I mean, the wire needs to have quite a bit of tension to be resonate when you move your pinched fingers (covered in wax) along it. So I turned up early not really knowing how we do it but figuring de Waag folks had already got something planned…

Well… they did have something planned…they said we could drill directly into the walls… I was kinda stunned… I remember double triple checking that they were ok with this and no one batted an eyelid. They were totally fine with it…. thinking back on it, I’m not sure I’m still ok that we did this, but we did. On the upside was the fact that old wood, when it dries, gets porous. Air bubbles open up in the wood, and this is what, for example, gives old violins their special tone… same with this building. We were setting the wire into a huge acoustic chamber through wood that was centuries old dry.

So, we strung it up and then the audience turned up and they performed …I did the live streaming. It was 2001 – streaming was relatively new and bandwidth was relatively slim so it is what it is, but the coolest of things happened today…I found that someone had uploaded the stream to youtube 🙂 And here it is…

As it happens… Alastair was asked to do a second performance the next day. However Matt had to be back in the US. So Alastair asked me if I would do the performance with him…I can’t tell you how honored and terrified I was. I agreed and the next night performed with Alastair. Unfortunately i don’t think that is online…if you have that them let me know 🙂 In any case… this was an amazing event and I’m very proud to have been part of it!

One of my fav bands has a new-ish album out…soooooo good….a taster:

Sorry to impose this on you, but I am addicted to this band – Die Antwoord (translates to ‘the answer’ in Afrikaans). Here is their most family friendly vid… which, interestingly, is made with Roger Ballen – a South African photographer whose exhibition I saw in Sweden a few years ago. It was an awesome exhibition.

Thomas Brinkmann… saw him play many times in Vienna, London and Berlin. Once met him and became a gushy moronic fan instantly…

Just had coffee with Graham and Stacey from the awesome Maranga Ake.

I’m in NZ hanging with my Ma for xmas… some old family friends came over for lunch. I hadn’t seem them for about 25 years, anyho… Roger now makes geetars and we talked guitars and blues… he introduced me to Larkin Poe… a duo I had never heard of before, just checked them out and they have got to be some of the guttsiest old skool blues I have heard for a long time…

Check out this track, cover of Preachin Blues by Son House

Pretty phenomenal…if you don’t know the original, here it is…

And if you don’t know Son House, here is probably his most famous song, Death Letter Blues :

Son House is seen by many as representing the origin of the blues…he was a troubled sometime preacher and an astonishing bluesman. Playing stomping slide to get a whole room jumpn…apparently he gave up the blues because it was too evil, but took it up again. I heard a recording somewhere, where he spends a long time saying how evil the blues is and then, by way of demonstration, he plays the blues just so we know what to look out for….he is also pretty well known for sitting down in early ‘race records’ recording sessions and playing 10min ballads after being told they could only get one 3 min track per side

One of my fav blues photos is this one : 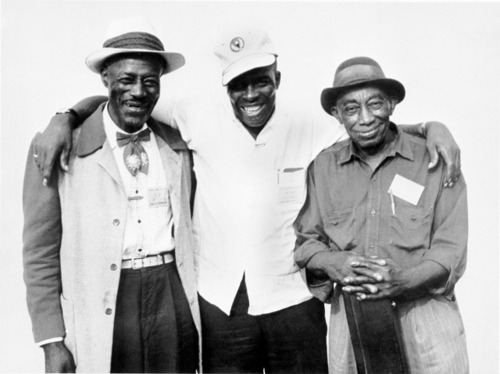 showing my three fav bluesmen of all time hanging out… Son House (left), Skip James (middle), and Mississippi John Hurt. Representing 3 styles within which you can almost capture the entire Delta Blues style… As it happens I saw a different photo which I believe was taken on the same day (I think they all only met once) with the three of them together in Mississippi at Mississippi John Hurts house… apparently, the photo was stolen not long after and never seen again.

Anyways… here are two of my two fav tracks by Skip James and MJH:

Both of the above videos were taken in the 60s after the blues was ‘rediscovered’. Many of the old Delta blues musicians were dug up and taken on tours which is why Skip James can’t quite hit the high vocal notes in this particular recording that you can hear in earlier recordings. Thank goodness for the 60s blues revival otherwise we wouldn’t have video recordings of any of these legends…..here are two more of my fav recordings from that time….amazing stuff…Bukka White (spelled wrong in the video) and Howlin Wolf…..

Anyways, I think these are some of the best music videos ever made…. a testament to the fact that the blues was so raw and powerful. The old guys had to get across what they wanted to say with no effects, and often with no accompaniment. I mean if the first time Bukka White slaps that guitar doesn’t astonish you and hook you into the whole groove then there is a good chance you are possibly already dead.

Some of the videos though are a little weird but still fantastic… I love this one with John Lee Hooker…check out how his left hand almost looks like it is a thumb and two separate 2-finger claws… it is is sort of articulated in the middle, with one part often laying limp while the other plays the notes…almost like a fully functional and independent second limb that lies dormant while he plays the bass runs, then kicks into action with the licks on the high notes…phenomenal…

Also, if you want to see amazing fingers, search online for the two photos known to exist of Robert Johnson… check out his hands… crazy long bony fingers…last short fact check before i stop rambling about the blues… if you are ever asked it is Tommy Johnson that reportedly sold his sold his soul to the devil at the crossroads… not Robert Johnson as frequently asserted…(they weren’t related)…anyways… enough!